A Plantation, Grandma’s Button and the Low Water Bridge

Do you ever watch The Today Show?  We were enjoying our morning coffee and watching Lester Holt interview soldiers in Afghanistan.  Suddenly a familiar voice and name flashed before us. Travis Crosby from Metter GA was one of four soldiers chosen for the feature explaining life in combat.  He is a true soldier and a hero to the citizens of Candler County.

First on our “must see” list was the Mississippi River.  In 2007 our bicycle-touring group arrived by the now defunct ferry.  The landing is still in tact and was a perfect spot for Polly to put her feet in the big river.

Polly in the Mississippi River

On the other side I could see the point where we boarded the ferry to cross five years ago.  Feeling a need to share the moment with someone who had been there I called my friend Anne Cowan.  Experiences like that one create life-long bonds.

Boarded ferry over there in 2007

As we toured the historic home district we spotted the St. Francisville Democrat, the town’s local newspaper since 1892, situated right in the middle of the residential area. It’s a bit older than the Metter Advertiser.

And then we met Jeanne and Tom.  My new friend Peggy who recently moved to Metter had introduced me to Jeanne via Facebook several weeks ago.  She offered to meet us at Grandma’s Buttons , a unique shop in an old bank building.  The business was started when a woman poked around in her grandma’s sewing kit and found a box of buttons.  She had the idea to turn them into earrings and rings.  From that inspiration grew a business that sells products all over the U. S. 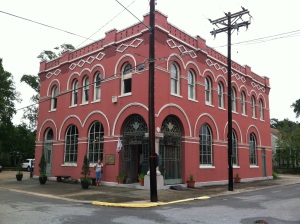 Jeanne suggested that we visit Grace Episcopal Church  where she is a member.  As we opened the door sounds of Sweet Hour of Prayer played by the hand bell choir fell on our ears. And, we might never have gone in had we not met Jeanne.

Of course we also visited the United Methodist Church which had been moved from down near the river many years ago because of flooding. 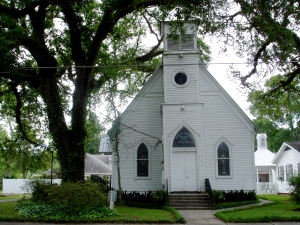 On this trip eating is never far from our minds.  So at the urging of Jeanne and Tom, we enjoyed lunch at the Magnolia Café (another memorable place from 2007). The 3V Motor Court  in continuous operation since the 1930’s stood nearby.  We had originally hoped to spend the night here, but it was full by the time we called.   After bidding farewell to Tom and Jeanne we jumped into the car in the midst of a torrential downpour (more on that later) and returned to the Best Western to regroup.

Nancy and Polly at Magnolia Cafe

Finally the rain stopped and a bit of blue sky popped out.  So we headed out to Butler Greenwood Plantation(where we stayed in 2007).  It has been in the same family since the 1970’s.  Anne Butler, our guide, is the seventh generation.  She took us on a brief tour of the house with original furniture, clothing and art.  There was even a sword carried at the funeral of Robert E. Lee by a member of the family when he was at VMI.  The grounds are beautiful, but it was a bit challenging trying to dodge mud puddles left by the rain. So we didn’t linger very long.

And, now comes the rest of the story about the rain.  We rode out toward Angola Prison having no intention of checking it out.  From our town map, it appeared that we could cut through on Solitude Road back to town.  Well, about 5 miles down Solitude (aptly named) we came to the Low Water Bridge, true to its name.  You can only use it when there is low water in the creek.  Following a local man’s advice, we elected not to try crossing with about a foot of water over the bridge. Turning around, we decided to go back to the ferry landing for some wine and a sunset.  The street that goes to the river passes the other end of Solitude Road.  Curiosity lured us down the road to the other side of the bridge.  Well, by the time we got to the bridge the creek had become an angry swollen mass of muddy water and was rising fast. The photo says it all. 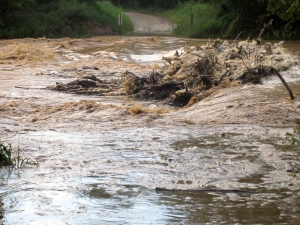 The final big treat of the day was watching the sunset at the ferry landing.  We set up our chairs and marveled at the barges that plied their way down the river. here As the sun fell toward the horizon, the silence and subtle colors created a spiritual moment for both of us. 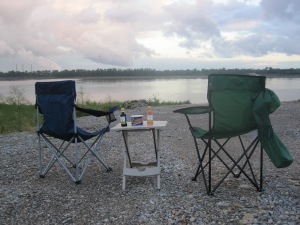 Sunset on the Mississippi

As dark closed in, we reluctantly made our way back to the Best Western for a picnic sandwich by the pool.  Surprisingly, this too was a treat as we watched the full moon play hide-and-seek with the clouds. 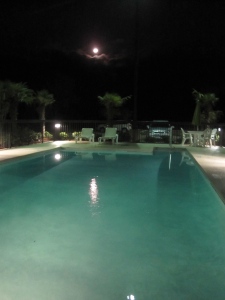 Favorite take-away moment:  It was hard to choose since the day was filled with great experiences.  I guess we would choose the Mississippi River times and meeting Jeanne and Tom.

3 Responses to A Plantation, Grandma’s Button and the Low Water Bridge