Have You Seen The Movie “Cars”?

As we walked out of the Fairfield Inn (thank you Wendy) in Weatherford, OK, all thoughts of camping that night vanished as we donned our fleece and warm socks.  The weather had changed drastically.  Nevertheless, our spirits were not dampened, because we were headed to “get our kicks on Route 66”.

Our first stop was the Route 66 Museum in Clinton, OK.  Our flashbacks of the cross-country trip in the Pontiac station wagon with our parents in the mid-fifties became more vivid.  The one that really stands out is the rented “car cooler”, a window-mounted, evaporative cooling system.  Yep, they rented one of those.  Can you find the photo? 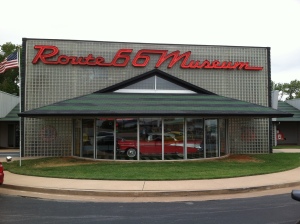 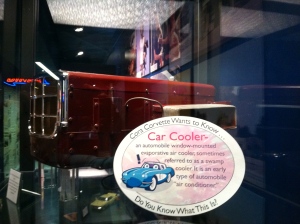 Have I Gained That Much?

We Have Pictures to Prove It

The manager at the museum recommended Gayla’s at the Market for lunch.  An old fruit stand from the old days is incorporated into the restaurant.  We enjoyed soup, a homemade chicken salad sandwich, and raspberry tea. 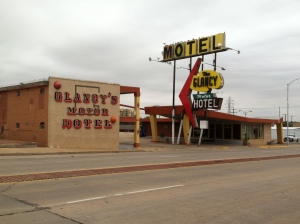 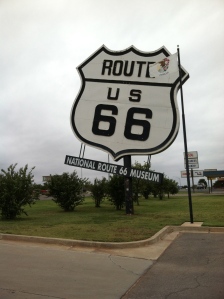 And now for the “Cars” story.  As we were headed west, Polly called her grandson, Seage to tell him about our travels so far.  She asked him if he had heard of Route 66.  He said, “Yes, that’s in ‘Cars’”.   He wanted to know if we had found Radiator Springs.  And we thought we found it as we arrived in Sayre, a sleepy little town on the route.  Indeed, Suzanne at the local art gallery told us that the Pixar folks interviewed locals up and down Route 66 to get a feel for The Road. 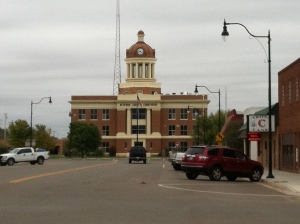 From Sayre, we journeyed on to Shamrock and McLean and other towns that could have been an inspiration for the classic movie, like the U Drop Inn and the old Phillips 66 Station in McLean.

Sometimes it was hard to follow Route 66 because I-40 had swallowed it up in many places.  But somehow we managed to find our way to the Fairfield Inn in Amarillo, TX. 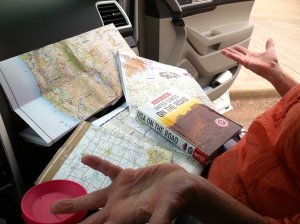 Where Do We Go From Here?

And This Is Only One Night?

For all my readers who want to know more about “Cars” and Route 66, click on “Cars”.

Could This Be “Tow Mater?”